BBHS was Wednesday awarded with the highly profiled international innovator award for the development of their innovative baggage handling system. BBHS forecasts an increased income by €70.000.000 during the next three to five years.

At the IATA conference in Bangkok, the innovation award “IATA-IGHC Innovator” winner was to be selected by the approximately 800 industry leader delegates, and initially by an Industry Jury as one of the three top candidates nominating selected BBHS A/S.  The Jury amongst others, had representatives from Boeing, Airbus and, UK Civil Aviation Authorities.

The 800 world’s aviation leaders voted BBHS A/S as the winner for their innovative baggage handling system and awarded the winner Trophy. Among the competitors was Qantas, Australia’s largest airline, with more than 30.000 employees.

The “IATA-IGHC Innovator” can be best described as the “Champions League” of the aviation industry.

“We are proud and very happy! When you are far away from home and awarded a price like this, it feels like you won for all of Denmark. It is the best appreciation we can achieve for our baggage handling system”, says Martin Sattrup Christensen, CEO of BBHS A/S.

The International Air Transport Association (IATA – IGHC) members who has awarded BBHS for the biggest innovation within aviation ground handling for the latest 50 years and for bringing baggage handling into the 21st century, sets all standards for the world’s airports and airlines. IATA represents 265 airlines and 83% of the global aviation traffic.

The IATA – IGHC conference in Bangkok has been perfect venue for the BBHS team. Their innovative baggage handling system has been fully exposed in the right professional environment. The participation and nomination has already resulted in numerous enquiries from airports and airlines.

“The award is of high importance to all of us. All major Nordic airports were present at the conference. They all need to improve their handling capacity and improve their work environment”.

The BBHS system reduces the repetitive heavy manual lifting which currently is carried out in all airports. This is achieved through systemized processes and semi-automation. The system can be integrated in airports for arrival and departure baggage, achieving a gentle and easy handling processes from airport terminal to the aircraft. The system provides possibility to service baggage in an efficient manner, ensuring that business travellers receive their baggage quickly upon arrival.  Regarding work environment, the BBHS system ensures a high standard of work environment, which reduces injuries generated by the repetitive heavy manual lifting. The BBHS system further helps to reduce costs increase efficiency and capacity for ground handling operators, airports, and airlines, enabling them to service the growing the ever increasing passenger growth and aviation traffic. 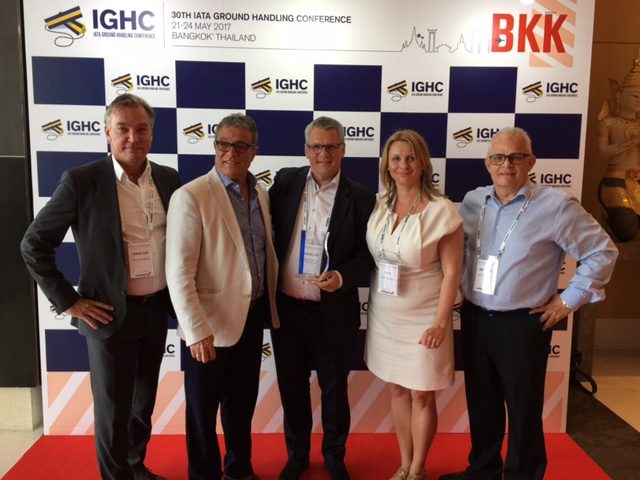